I’ve been asked a lot of questions recently about speaking at conferences, mainly at the recent New Adventures in Web Design conference. I ran into a lot of curious people at the after-party who either wanted to get into speaking or were just curious about how things worked behind the scenes, so I thought it might be useful to note down my personal process and some insights into the Conference world. 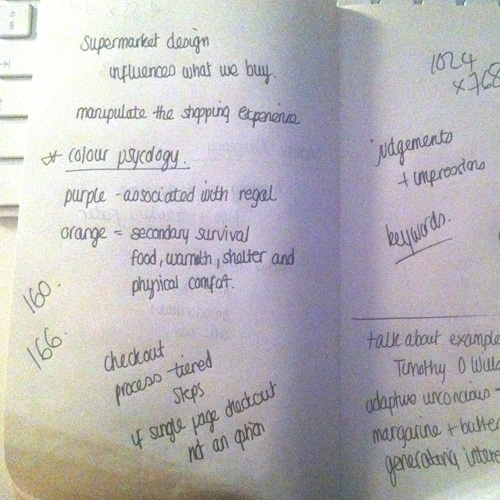 A page of scribbles from my notebook for New Adventures Conference – yes, I’ve spelt some stuff wrong.

A talk always starts in the same way for me, notes. Hundreds of scribbles, pictures and ideas that eventually form the basis of the talk. I generally have an idea in my head, or have to adhere to perhaps a theme the conference organiser has in mind, generally I’m asked to speak about iPhone related stuff, as that is what I specialise in, but I was, and always have been, first and foremost a designer, so in the case of New Adventures, we were encouraged to think about new twists and brand new topics to expand the mind and pull away from our comfort zones a little.

I had my topic in my head from late November, I started reading books, lots of books, over Christmas – in relation to what I was looking to speak about. Little paragraphs jump out, I circle them and look to explore them further, find quotes and always ensure they back up the message I’m trying to relay. I normally make sure I have at least 10 different ideas and sections to explore and then pick those that I feel are the strongest. I’m also slightly different (from what I understand other speakers do) in that I type out my entire talk first, almost like a script, I then annotate sections where I feel a slide would be appropriate or something might need explaining a little better and read and re-read this until I start to form definite sections.

In the book “Confessions of a Public Speaker” it is apparently a conference “no-no” to start your talk with a large section about yourself, what you have achieved and what your pets name is, a brief intro is fine. I have a bit of a problem talking about myself anyway so I’ve always adhered to this as much as possible. The reason Scott suggests shortening your introduction is that it dilutes your message, stalls the start of your talk and if anyone is that interested, they’ll always ‘look you up’. However, I know plenty of people who start this way, there certainly is no golden rule – just my personal preference to always leap straight in, where possible.

As an estimate, but perhaps I’m slow, my talks generally take me 2 weeks to create, design slides for and rehearse. For New Adventures, I allowed time for this over the Christmas period and did chunks throughout December prior to that.

You need to practice your talk. After talking with a lot of the speakers at New Adventures, I was surprised to hear that not many rehearse in the traditional sense of the word, actually walking around talking to themselves.

I do. I feel stupid, sure, but it always highlights a weakness in my talk, and I would rather find this out infront of my dog than 650 attendees. Again though, it’s whatever works for you, other speakers, far more eloquent than me, don’t use this method, but I would encourage you to talk out loud if possible, at least once.

Only last week, whilst rehearsing, I realised that my habit when speaking, wasn’t the traditional “um” it was “and” – which in a way, is far worse. At least “um” is a pause, “and” means you actually have to follow up with something significant and meaningful. Knowing your weaknesses before you get up there, is a huge bonus.

Another weakness of mine is being thrown by technical problems. For those who saw me at New Adventures, you would have seen I’ve become quite good at thinking on my feet when this happens, I’m referring to the microphone problem (which was entirely my fault!). However, every single venue I spoke at last year, was different. You would think this wouldn’t throw you but it can take some getting used to.

Sometimes we have multiple monitors on the stage, one showing the slide the attendees are seeing, another with the timer and another showing the slide that is coming next. Sometimes you will find yourself in a traditional lecture-style hall, with the attendees high above you, and the screens out of view, other times, you’ll find yourself on a stage, looming over the attendees. I personally find the lecture hall style quite daunting, because you can literally see every fidget, tap of the laptop and person checking Twitter, there is nothing to cast your eyes over to concentrate on. The monitors can sometimes fail, your clicker to advance the slides can fail, or in the case of New Adventures, I forgot to bring it onstage altogether and it sat in the pocket of Dan Rubin the entire time – confining me to a talk, mostly behind the lectern.

Then comes the dreaded Keynote dual screen, the bain of every speakers talk. Dual screen in Keynote allows us to see presenter notes that we may have written whilst outputting only the slides to the attendees. Even the most experienced of speakers sometimes rely on these for “key facts”, especially in longer presentations. It should be just plug and go, the truth is, it rarely is and much fiddling ensues.

It’s said though, that you should be prepared for everything to fail – including your slides, and be able to speak with just your talk. It’s always something I keep in the back of my head when designing my slides, as frightening as it might be, Andy Clarke told me it was very nearly a possibility at An Event Apart once when some generators failed. 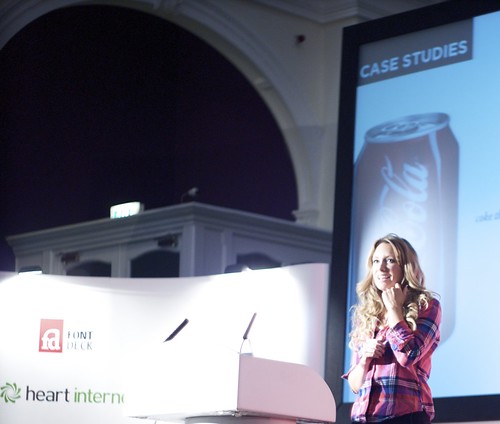 Thanks to Toby Howarth for the picture

Many factors will try to affect you. The hardest talk time is known as the “snooze slot” right after lunch, when attendees are full of grub and finding it hard to concentrate. I’ve had this slot plenty of times and it’s never as bad as I think. To be honest though, you’ll go into a kind of auto-pilot mode when doing your talk, you won’t be too aware of much and if something does happen that snaps you out of your flow – take a deep breath and remember although a couple of seconds feels like a minute to you on stage, it’s better to recompose yourself, find your feet and then start speaking again. 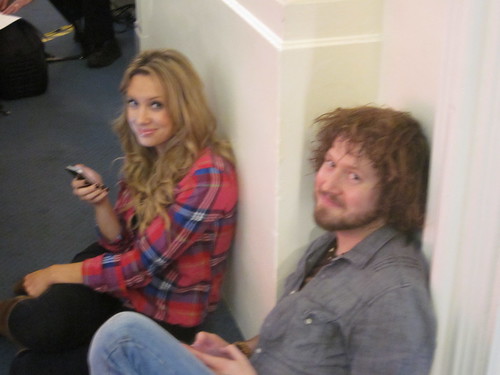 You’ll be relieved, even if you were looking forward to it. You’ll then be filled with dread, grab your phone and check the back channel of Twitter. This has become such ingrained behaviour with speakers that frequently the conference organiser will tell you, before you’ve left the stage, what the back channel is like to just give you a heads up. Both Ryan Carson and Colly have done this with me, but I’m not sure if this tends to be done because I’m more susceptible to people commenting inappropriately. The back channel, will never be unanimous, neither will the countless reviews from attendees that follow, sometimes weeks after, but the important thing is, you should be able to gauge some kind of feedback from this, learn and reiterate for next time. It’s always genuinely lovely and heartwarming to get people say they loved your talk, but listen to those that have constructive criticism too. You’ll also have to gauge what is constructive criticism and what is said nastily without context or back up of argument, take the latter with a large pinch of salt – they have their own, bigger issues to deal with first, it’s nothing to do with you.

You’ll have to grow a thick skin very fast, and coming from a very sensitive girl who is susceptible to crying at the smallest things, I’ve had to grow a double thick layer.

Rarely will you be paid. If you go into speaking for the money, you’re going in for the wrong reasons (lather, rinse, repeat). Generally, your travel expenses will be paid, including your hotel and flights (if appropriate) – sometimes a speaker fee is offered but if you assume you will speak for free for a long time before this happens, you can be pleasantly surprised when it comes along. Again, if you are going into speaking for the money, you’ve not got anyone’s best interests at heart, least of all the community with which you are trying to inspire. 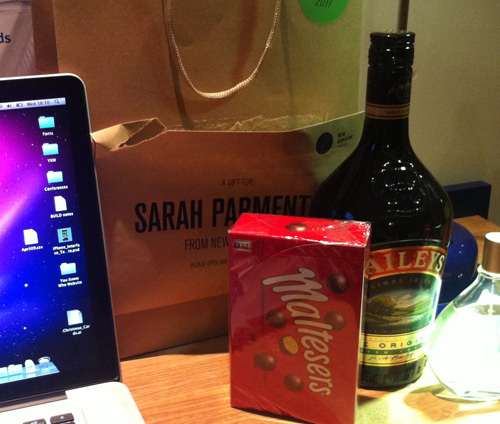 You’ll meet some awesome people within the industry, you’ll also get to see and experience places you would never have visited before. You’ll normally have a wonderful speakers dinner at a nice restaurant somewhere and get to enjoy the company of friends you rarely see. Speakers goodie bags are a new, but welcome addition. I received a massive bottle of Baileys and a box of my favourite sweets – Malteasers, at New Adventures as a thank you for speaking – just this personal touch can mean an awful lot. Carsonified do a similar thing and leave sweeties in your hotel room, and also include “resolve” headache remedy for the conclusive “morning after the after party” headache.

Obviously the main perk is inspiring and uniting the community, like I said before, you’ll never do this unanimously – that’s part of the challenge, but you’ll certainly be able to gauge whether you are improving or not. I feel like I have improved in the short time that I’ve been speaking (I started at WDC late 2008) by not getting too precious about my talks and learning from feedback. This is by far the most valuable lesson I have, and continue to learn.

I’m going to wrap up here as this has become a far longer post than I anticipated, but if you have any specific questions, I’m more than happy to answer them in the comments.