This has been written as part of the Geek Mental Health Week – starting on Monday October 3rd 2016.

You can hear me read this as an audioblog – 8 minutes.

T his time of year is a strange one for me, it feels like death is in the air – I see it in the changing colours of the leaves, I feel it in the slight nip in the air. It’s like the worst day of my life is coming all over again and the drumbeat is just getting louder the closer it gets. October 3rd is the anniversary of my Mum passing away. Unremarkable. People lose parents every day, right? I’m nothing special, my story is nothing remarkable and nothing that hasn’t happened to thousands of others like me in one form or another.

My mental-health however, is my unique story. We all have our own unique chemical makeup, and how we process different events depends so much on the grey stuff upstairs.

A little bit of back story. I come from an exceptionally small family. I’m an only child. My family consisted of Mum, Dad, Pops (Mum’s Dad), Grandma and Grandad. In the last 5 years, I’ve lost four of them, almost all five. I almost lost Dad to septicemia in 2011, and lost Mum, unexpectedly, a year later.

My health, mainly mental health started to deteriorate in 2013. 2014 I had such bad social anxiety that I stopped going out entirely. The nearer it would get to going out, the more anxiety I would feel that I would be the miserable one at the party. I thought people would judge me for it and I would have no excuse when my mind was telling me I’d had enough and needed to head home. Instead, I sat in my bed and watched TV on my laptop. Then as the months passed, the laptop was shunned and I would just sit there in silence, crying and wondering how I got into such a state.

Social media didn’t help one bit. When the inevitable photos of the night out were posted, and I wasn’t in my usual spot, it would make me worse. Gradually, other people unashamedly took my place in those photographs. I felt like social anxiety was out of my control and worse still, only one couple in my friendship group of 20+ people, actually reached out to me as to why I wasn’t going to events as usual. They had a hunch there was something else underlying other than me just being branded by the group as “anti-social” or “difficult”. Perhaps that says more about the people I thought were my friends. One by one, I’ve lost nearly all of them.

2015 I had a full mental breakdown. I knew I needed help, and I knew I needed it quickly. I contacted a number of places in the UK and none of them were able to help me at the speed I knew I needed it. What came next was a testament to my desperation, it was midday and I booked a flight that was leaving at 5pm to go to New York. I told no one but my Dad where I was going. I knew the best therapists and psychiatrists would inhabit that city and I would figure it out when I got there.

To this day, I’m not entirely sure how I managed to seek out the psychiatrist who turned out to be absolutely everything I had been looking for back home. I like to think my Mum somehow divinely intervened and played a part in getting him into my life. By midday the following morning, I was sat in his office in Chelsea, NYC. I was shaking like a leaf, desperately trying to hold it together. I didn’t breakdown, I don’t remember crying. I remember just being so desperate for him to tell me what was wrong and to get me on the road to recovery, I wanted to make sure I gave him a balanced view of everything that had happened in my life, so that whatever the diagnosis was, I felt like I had given a true representation of everything that had happened.

I stayed out there for 6 weeks. I invested in myself both financially and mentally. I needed a psychiatrist; I needed someone who understood that I need to know every nuance of why things happen. He would give me reading lists and books to help me understand the brain, and I soaked it all up like a sponge. Neuroscience books still continue to be my favourite genre.

I was diagnosed with PTSD (Post Traumatic Stress Disorder). You know, that thing everyone is currently doing press-ups for on Facebook? A word commonly associated with veterans and war victims. This is going to come as a huge shock to friends and family who are reading this, I apologise that I haven’t had the guts to tell you myself – there’s no good way to bring it up in conversation without it seeming self-indulgent. You know I’m not the type of person who likes a fuss.

I saw some truly hideous things the day my Mum died; the kind of montages that if you saw them on television, you’d probably turn the channel. Let alone if it was playing out in real-time on your own parent. Add into the mix that I’m in graphic design and therefore have an exceptionally vision-led memory bank and the other ingredients of being exposed to death after death for almost 5 years. It’s apparently the perfect mix to bake a PTSD cake.

Knowing what I know about PTSD now, there’s no doubt that’s what it is. Ambulances made me feel physically sick. Ambulances on sirens made what happened that day start playing like a film, and still do. When a TV show starts casually performing CPR on someone; instant tears and my Mum’s face projected onto the actor.

Unbeknown to me, that day in NYC I had walked into the office of someone who had been the go-to psychiatrist for all the post-9/11 service workers; thus why I felt like our meeting was divinely intervened. He explained to me that trauma is like being hit over the head with a baseball bat, it can do incredible damage to your brain. PTSD can sit in someone like wood kindling, it starts as embers then waits for an incident to blow on it to ignite it into a roaring fire. It doesn’t get better on its own.

One of the things I find most debilitating is that my perceived-danger-radar is going off all the time. It’s like my brain can’t distinguish between actual danger, and perceived danger. For example, the other day when Chelsea in NYC got bombed, my brain reacted like I was actually there; I was feeling the terror, the anxiety and the danger even though I was sat at home, safe in my home-office. My teeth started chattering (which I’ve now learnt is the first sign of a panic attack for me) and I was silently crying. It probably didn’t help that Chelsea was very familiar to me, but healthy brains can distinguish between actual and perceived danger. My brain was just firing off all over the place.

Acute anxiety in the mix is hideous – it’s the one thing I wish I could walk around with a sign on my head and have people understand how the smallest thing can set it off. Some of the worst things for me are “Can I have a word?” – or someone sending me a text “I need to talk to you” and then disappearing for minutes, sometimes hours before responding. I once woke up to a number of missed calls and some ambiguous texts from a friend – I was physically sick before I got an answer as to what it was all about. I have to keep a diary of all the times I’ve felt like something is going to turn out to be the most awful thing in the world, only to find it was either something nice/not anything to be worried about. 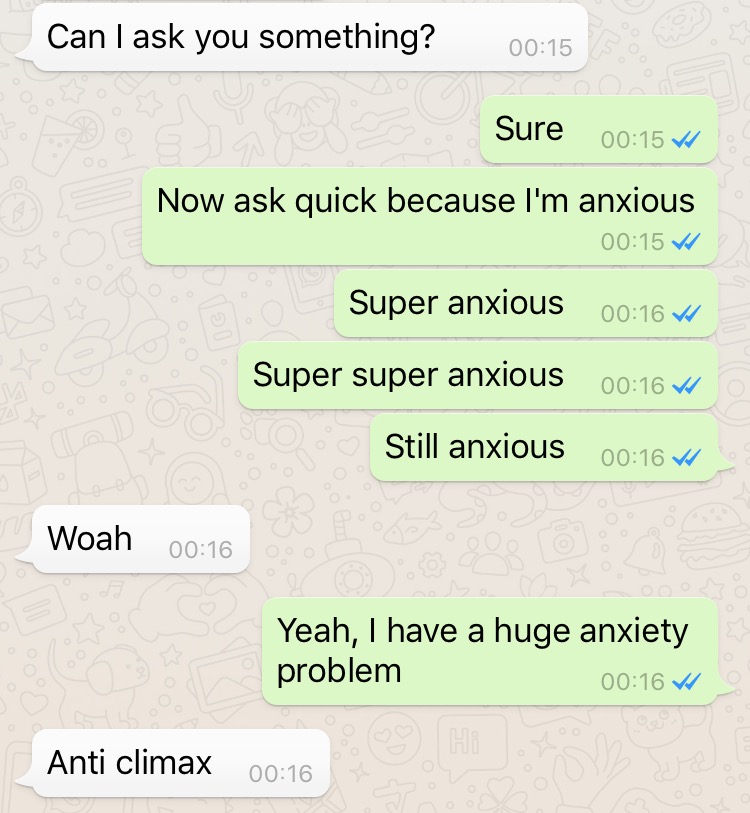 Anxiety seems to be on the rise in general. At one of my companies, Blushbar – three out of four employees suffer with anxiety. I make sure I handle that in the same way I would any illness; ignoring it isn’t an option. On Slack (our company messaging system) I make sure I don’t leave any cliff-hanger or ambiguous messages. If I have to schedule in team meetings, I’ll put bullets as to what we’re actually going to talk about and write “Nothing to be worried about.” in the notes. If we need to address anything that could induce anxiety, I will write a message in Slack saying what the problem is (it’s rarely personal to any one person) and ask them collectively to put their heads together to solve it so that the responsibility isn’t on one person alone.

I’ve felt stuck in a merry-go-round of mental health for over a year now. I’m on pills which keeps some of it at bay, but the main thing I’ve found to be so debilitating is the low self-esteem and low self-confidence. I was never full of myself before, don’t get me wrong, but I never realised how having not a smidge of either of the above, can really turn you into a frozen mute, in both personal and professional life. That’s the most frustrating thing to me.

I’ve been very quiet in my industry for a little while. A mixture of imposter syndrome, quietly working on my companies and bowing out of freelance work. I’m getting there, slowly but surely. I’m trying to fight fear every day. I’m now trying to make a conscious effort to share my work and my learnings with the community once again.

Raising a glass this week to everyone voicing their problems and dealing with them silently, outwardly or seeking help. You’re doing great. You’re never alone.